Okay so I’ve gone and read yet another adult book.  Sarah’s Key by Tatiana de Rosnay was powerful and poignant and a must read! 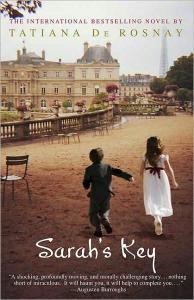 She was ten when they came.  The pounding at the door, the fear written on her mother’s face, the terror and determination of her little brother not to be taken.  He hides in their secret place, the cupboard in his room.  It was a cleverly disguised place, looking like part of the wall.  You couldn’t even see where the key hole was.  She tells him to hide there and she will come back for him, keeping the key in her little pocket.  They are taken first on a bus ride to a large stadium where they stay for days, the yellow stars on their clothes labeling them.  Next, separation from the men– her father– then a train ride.  Soon, they are in a terrible place with barbed wire all around, little or no food, no way to clean themselves.  Then the worst thing of all, their mothers are taken away, leaving the children alone with the policemen.  She becomes hardened, scrabbling for food, trying to care for the littlest ones.  The little girl plans, schemes and one day, she escapes, determined to get back to Paris and her brother in the cupboard.  But what will she find there and what will she do then?  Her name is Sarah.

American Julia Jarmond married into a French family and works for a small magazine that caters to American ex pats.  She is assigned to do a story on the Vel’ de Hiv’.  As an American, she knew nothing about the incident that occurred more than 60 years earlier but, as she researches, she is amazed and appalled to find that very few of the French know of it either.  It seemed a great conspiracy had played out so that the French could forget the part they played.  Julia’s research uncovers a secret connection to the horrible round-up of Jewish families. As she digs deeper, shocking truths are uncovered.  Truths that might just cost her everything.

De Rosnay writes the stories of Sarah and Julia in alternating chapters.  Julia tells her story in first person narrative.  Sara’s is told in third person and with a different font.  As the stories get closer and closer, Sarah’s voice is silenced and Julia continues the telling.  Amazingly, for such a sad story, it ends on a hopeful note.

I, like many Americans, had never heard of the Vel’ de Hiv’.  It’s been a very long time since I studied history and most of that focused on America’s part in WW II, as the heroes who discovered and rescued thousands of Jews from concentration camps.  I had no idea of the French complicity in the deaths of so many Jewish families and children…Children!  Tears of frustration and sadness were fought back on nearly every page, as is often the case when I read stories like this.  If you’ve not read the book, it should be on the top of your list.  I have put the movie in my Netflix queue but am not sure I’ll be able to actually watch it unless I have an entire box of tissues handy.

Do YA Read Wiki